While I’m as much of a fan as charismatic megafauna as the next person, sometimes it’s the little things or the odd critters that bring the most delight and stick in the memory.

I was quite happy to agree to a suggestion from a very good friend that we go to Sri Lanka in the hope of seeing leopards and sloth bears, because who doesn’t want to see leopards and sloth bears?! And I’m so pleased we did go, because Sri Lanka was beautiful with amazing wildlife, and tasty (oh so tasty) food, and we did see leopards and sloth bears which lived up to their reputation as cute and cuddly love-to-see-them creatures. But when returning home and facing the inevitable question, “what was your favourite animal you saw?”, I didn’t even have to think about it. It was two things actually – the giant blue earthworm and the white-winged black tern.

(Sidenote: new frogs will always be the most favourite thing I see when on holiday or anywhere, but I think people get bored of that as my answer all the time, so in the interests of variety I’m going with something different here. If you want to see some of the frogs we saw, which were AMAZING!, check my Instagram.)

We saw the giant, iridescent blue earthworm (Megascolex coeruleus) in the rainforest at Sinharaja Forest Reserve. This fabulous, not-often seen creature, is spectacular enough to warrant mention on a favourites list. But I’m putting it at the top, because it was so unexpected. We’d had a creature-filled morning, with many endemic beautiful birds, several snakes, large lizards, small lizards, and pitcher plants, and I was feeling contented, thinking we’d covered a good variety of new and exciting things. Then we turned to head back to the guesthouse, and there it was – a one metre long, shiny BLUE earthworm! Who knew!? Completely new, something I didn’t even know existed, and just shuffling along without a care in the world. 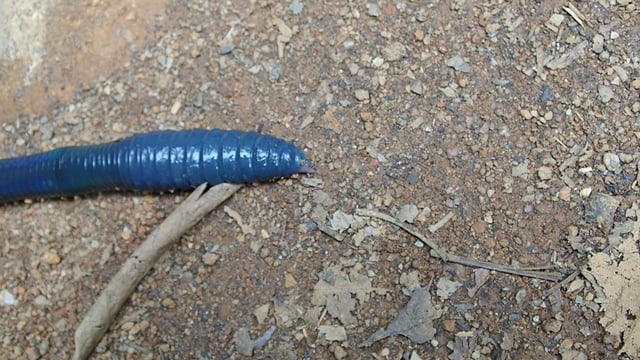 As for why the the white-winged black tern was a favourite, that is a bit more complicated. When our guide identified the gorgeous, black tern I’d seen swooping for insects just above a small wetland at Yala National Park as a white-winged black tern, I found myself way more excited than I thought I’d be. While this tern shows up in the inland New South Wales wetlands where I work, that happens very rarely and I hadn’t seen it, and anyway this migratory species never shows its colourful breeding plumage in Australia, so it is just another mostly white-looking tern. But there is was! Something I’d heard of but never thought I’d see, and I was seeing it in breeding plumage! (Which, I realise could be the sentiment that outs me as a tragic-birder now…). It was just stunning.

So, my favourite non-frog animals are not just about looks, they come from a moment or a feeling or just a quirk. It is about appreciating the other things. Want to know more?

PS, I can’t recommend our guide from Sri Lanka highly enough, Mevan Piyasena. His itinerary was perfect for what we were interested in, and his knowledge of the wildlife and ability to make sure we were in the right place at the right time gave us the perfect trip. Don’t hesitate, just go and go with Mevan!

PPS. Want to know more about GIANT earthworms, check this article in Australian Geographic for information on the giant earthworms found in Australia.